It’s all about the grinder! That is the answer you will get if you ask a coffee lover whether you should get an espresso machine, a coffee maker or a dripper. Do you want some coffee? Go get a grinder. Do you want a good coffee? Go get a grinder. Seriously, I just want coffee. Yup, go get a grinder! Of course, the most orthodox among coffee geeks will insist you should buy a grinder that will cost you well over 250 EUR. Why? Because it does not produce excess dust, the grinding is even, it does not heat up while grinding, it is quiet and has a million different settings. While that is all true it doesn’t mean you cannot get a perfectly fine grinder on a budget. The question is though – which one of the budget friendly options should you go for, Wilfa Svart or Baratza Encore? Let’s compare the two grinders that beginner coffee enthusiast usually aim for.

Wilfa or Baratza Encore, that’s the question all those in search of the perfect beginners’ grinder will ask. Both come in a relatively budget-friendly price and at the same time allow to experience the beauty of the coffee world. Both have burrs, both have the grinding range from a traditional moka pot to chemex. Their parameters are very similar and so a dilemma may arise – which one to buy? Wilfa or Baratza? Svart or Encore? After all, this should be a reasonably thought out investment.

Both come in a relatively budget-friendly price and at the same time allow to experience the beauty of the coffee world. Both have burrs, both have the grinding range from a traditional moka pot to chemex.

A grinder is not an automated press, CNC moulder or Fiat Multipla. It must present itself nicely, especially in modern kitchens. Hence the visual aspects of any home equipment must meet certain requirements. Baratza Encore represents a classic grinder design, with its’ transparent, conical upper container and a slender, compact body made from a high quality plastic.

You will find a small “grind on demand” button over the bottom container and a knob on the right side that allows you to grind non-stop. While it may wow in terms of design, it is reliable and looks just good enough. All the plastic elements are nice, don’t creak and even though it may not seem this way at first glance, the whole construction is very stable. It won’t budge or fall while grinding and does not need any extra support.

Wilfa Svart slightly differs in appearance from classic electric grinders such as Baratza. The slightly hidden coffee container and a more elongated but narrower shape is not commonly found among this segment of coffee grinders. Nevertheless it simply looks good, with silver metal finishing adding a certain something to its appearance. Just like Encore, Svart does not creak, squeak, all the elements are well-matched and look to be high quality components. Wilfa is slightly lighter then Baratza, but still steady and won’t jump around the countertops while grinding.

Just like Encore, Svart does not creak, squeak, all the elements are well-matched and look to be high quality components.

The grinders differ when it comes to grinding modes and coarseness settings. Baratza Encore, as I mentioned before, can work in an on-demand mode by pressing the designated button and holding it down. But it can also work non-stop if you turn the switch located on its side. Wilfa Svart does not have the on-demand grinding feature, but it is equipped in a timer knob that allows it to grind for a set amount of time. Of course the process can be stopped at any given moment by simply re-pressing the grinding button.

Wilfa’s constructors focused on large, bold coarseness setting marks, also indicating the optimal ranges for specific brewing methods. Starting with mokka, through aeropress, chemex and french press. Baratza on the other hand is a classic numbered scale with a 10-40 range, located at the bottom of the upper container.

… let’s focus on the most important – grinding! As you would expect it from a budget-friendly coffee grinder, both Baratza and Wilfa have conical, steel burrs with a 40mm diameter. In both cases they are easily removed, cleaned and remounted.

Construction-wise, the burrs in both grinders are not different from one another. They are standard burrs commonly used in this class of grinders. They will give you a nice enough grinding quality on their own, so it’s bracing and mounting of the mechanism that makes for better grinding results.

The coarseness range for both Wilfa and Baratza will be very much the same. From a fairly fine one that will work for classic mokkas to very coarse one perfect for a french press or cold brew. Keep in mind though that if your preferred brewing method is espresso, neither of those grinders will be right for espresso machines. Even the finest setting is too coarse for that specific method and surely won’t result in a properly made, lush espresso.

As you have probably guessed by now there is no straightforward answer to the whole Wilfa or Baratza? question. Examples of how various coarseness ranges look in both grinders can be found at the end of this article.

The pictures show the differences between each setting range and both grinders. As you can see, the coarser the setting the bigger the difference in size and uniformity of the ground coffee. It is clearly visible that at their coarsest setting neither grinder will give a perfectly even result, but they do not produce excess coffee dust that can tamper with your brewing. The finer the setting, the more stable the burrs and hence the more even the result.

It is noticeable that Baratza’s grinding is slightly more even. Of course there is still a difference in the grain sizes, but it is not as noticeable as in Wilfa’s case.

This checks out in the brewing process. I made two Aeropresses using the same coffee beans, same brewing method and roughly the same grain coarseness. The effects? Both coffees maintained their character. I purposefully used Kenyan beans, very brisk and clean with regards to flavor, so any potential differences would be easy to spot. Cupping revealed slightly more nuances in the Encore ground one – the flavor was more pure and fruity, while the Wilfa one was more flat, with less distinct sweetness and fruitiness.

I cannot say those coffees weren’t good. Sure, knowing how they could taste if I used a higher class grinder it is apparent this is not a coffee championships level of grinding and there is more to the coffee that either Wilfa or Baratza can ever extract. What is worth remembering though is that those are budget-friendly grinders and quality-wise you really do get your money’s worth.

In the Wilfa vs Baratza clash, Baratza is the winner for me. Keep in mind that it is still more expensive than Wilfa, and Svart did give decent results too.

I did mention at the beginning that when it comes to home appliances, looks matter. But not looks alone – their usability is just as important. It would be great if you could have your freshly ground Sunday coffee without waking up any family members or neighbours for that matter. Unfortunately both Wilfa and Baratza will surely wake whoever is sleeping on the other side of the wall. Encore can be pretty loud, especially when the upper container is empty. Wilfa will only be slightly quieter, but both grinders will make less noise if you put the beans in. Besides, the whole grinding process is just several dozen seconds, but those more sensitive to noise should keep that in mind.

While preparing this article I noticed that Wilfa Svart must have been designed by Scandinavians. It is prone to all attempts of jabbing fingers into moving burrs. Not only it won’t allow you to turn on the grinding while the upper container is removed (Baratza has the same feature), but the grinder will also automatically shut down if the lower grain container isn’t properly inserted. Baratza has one feature which Wilfa lacks – you can grind into any container you want, not just the dedicated one. Wilfas construction will not allow you to do that.

Both grinders happen to be very… hungry. Yes, you have that right. Putting in 18g of coffee resulted in a sudden disappearance of nearly half a gram, despite thorough tapping. Should I have omitted the tapping altogether would have lost me 2 grams.

Is this what I really want?

If you want to start your adventure with brewing coffee it’s obvious beginning with spending a good couple of thousands is not the reasonable thing to do. Drip, aeropress or french press combined with a budget-friendly grinder is a very good start indeed. So… Wilfa or Baratza? Both are the top of their range. Spending much less than you would on a high class grinder is a smart move and for a nice price you can have a grinder that will stay with you for years. That is until you decide you need something high-notch to get those flavor and aroma nuances.

It is worth remembering that both Wilfa and Baratza are compact grinders. Relatively small appliances that can easily stand on your countertop or in a cabinet without taking the whole available space. Which is not at all that obvious since professional, high class grinders can go as high as 50 cm (without the top container!). This makes Baratza Encore and Wilfa even better options for total beginners.

Soon after this entry was published Wilfa released a new type of Svart, next to the already existing metallic silver one. This one comes in black matt and CGWS-130B number. However it isn’t the color that is the main difference, it is its inside. The engine in the black model has been changed to a slow-speed one.

How does this change things? First and foremost it prevents the burrs from overheating. This, according to the constructors should prevent excessive escape of essential oils, resulting in a more aromatic and flavorful brew.  All the other parameters remain the same. For sure the new Wilfa is a bit quieter, but the speed of grinding did not drastically improve. Same can be applied to the final taste of coffee – the change in flavor is a small but positive one. You can surely assume that a slow motion engine might be more durable and will handle very lightly roasted coffee beans much better than its silver predecessor, as they happen to be harder.

How do they grind?

Fine setting on a Wilfa Svart /photo by Marcin Rzońca

Fine setting on a Baratza Encore /photo by Marcin Rzońca

Coarsest setting on a Baratza Encore / photo by Marcin Rzońca 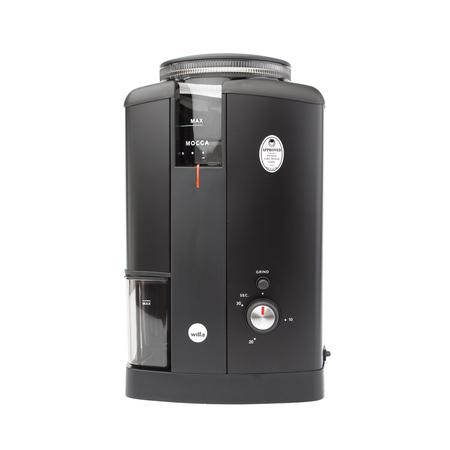 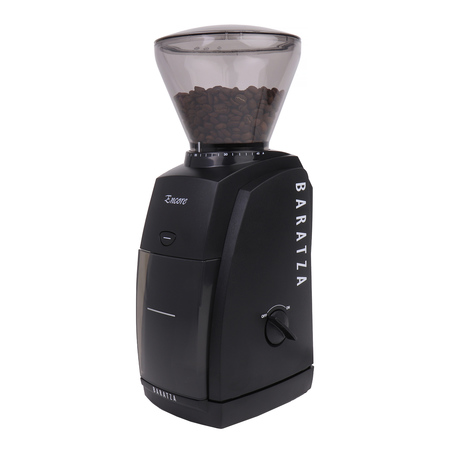 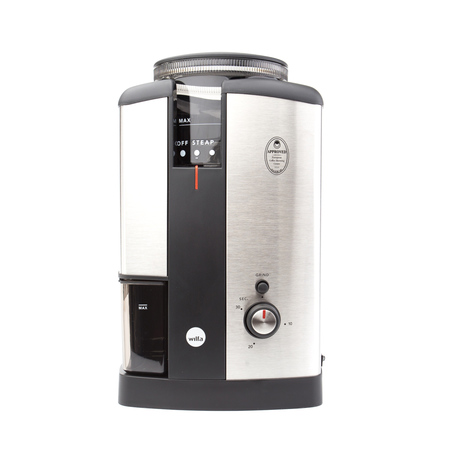 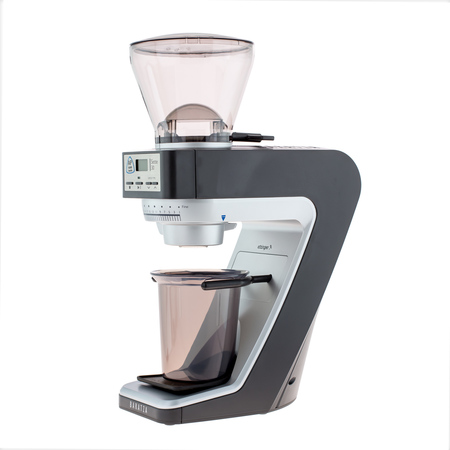