The CHEMEX®. A magic word that is the music to the ears of every lover of good quality coffee. A beautiful glass carafe with a characteristic wooden collar, with which you can conjure up large amounts of good black coffee. And yet, has Chemex always been synonymous with specialty coffee? Is brewing in Chemex subject to any rules?

It’s the beginning of the 1940s. In New York, Peter Schlumbohm, a German inventor and chemist, decides to create and patent a filtering device, which will be used for preparing coffee. Result? The CHEMEX® Coffeemaker is born. The icon not only in the world of coffee, but also in the world of design.

Designing the object by Schlumbohm was not a coincidence. He made a living from creating everyday, functional things that make life easier. He had several hundred different inventions and patents to his credit. However, it was the Chemex that has been most widely recognized.

A glass carafe, somewhat reminiscent of a laboratory flask. A wooden collar or a glass handle and a distinctive “button” that indicates half the volume. Coming with special, one-of-a-kind, unmistakable, bonded paper filters. Here is the Chemex. The Coffeemaker.

The fact that Chemex is both a brewer and a coffee decanter, as well as its well-chosen shape and elegance have made this device an icon of design – while it can be found in thousands of homes around the world, it is also displayed at the Museum of Modern Art in New York. The Illinois Institute of Technology, on the other hand, has declared Chemex one of the hundred best-designed products in modern history.

Not only has it been recognized by museums, but also the former president of the United States of America – Barack Obama. It was the President himself who ordered several dozen of these coffee gems to the White House. Some of them were given away as gifts, but others were used by the former head of the superpower and his family. What a vivid example of the magic of the Chemex!

The shape is one thing. You can marvel at the beauty of the design, but what’s more important is the taste of coffee. Chemex has won the hearts of millions of people. It even runs through the series Mad Men, which perfectly captures the spirit of the mid-twentieth century. In one of the scenes, behind the couple of main characters, there it is: the Chemex, standing proudly on the kitchen counter.

Of course, several decades ago, no one thought that some specialty coffee even existed. There was just ground coffee, which was supposed to smell nice and invigorate you in the morning. Hence, Chemex was not a niche product for bearded hipsters savoring bergamot and blackcurrant in their coffee, but rather quite a staple piece of the American middle class kitchenware.

It had been so until more and more common, faster to use, automatic pour-over or espresso machines pushed Chemex out of homes. Obviously, it became then a sort of a relic and gave way to new trends. It was only the so-called Third Wave Coffee that restored the splendor of devices like Chemex, calling them alternative brewing methods – as the alternative to pressure machines and espresso (alternative being older than coffee machines – ridiculous, right?).

But now, let’s focus solely on the Chemex. What’s in it and what has it captured our hearts with, apart from its design? The device is not only the glass vessel, but also dedicated paper filters. They determine the power of the coffee flavor. The power of delicacy, to be precise. Yeah but… what’s the deal? Original bonded filters give the coffee its unique character. They are quite thick, filter out all unnecessary stuff, which translates into a very delicate, dry taste of the infusion. They are perfect for lightly roasted, fruity single coffees, especially wet processed ones. They are appreciated for their lightness and purity of taste. I really recommend that you find it out for yourself.

Chemex filters are universal in size. They fit 6 cup, 8 cup and 10 cup jug. Only a small, 3 cup Chemex launched recently goes with other, half moon filters.

They are mainly available in white version. Sometimes you can buy unbleached filters which in my opinion affect the taste of coffee and I definitely prefer to use the standard ones.

Circles or squares? There are two filter variations available. They come in the shape of a circle or a square. They work exactly the same, you put them in the carafe in the same way. The difference is that the circular filters evenly protrude over the rim of the carafe, which is convenient while pouring water over the coffee. Square filters have spectacular ears, which make it easier to grab the filter, pull it out and throw it away after brewing, but they can come slightly in the way of the brewing process itself. I used to use the square filters and while I was holding the jug low over the coffee so as to avoid agitating it while brewing, the corners would be a bit in the way.

You can buy them unfolded and fold them on your own, or pre-folded and then you just take them out of the box, put in your Chemex and pour with hot water before brewing coffee.

Enough of this chitter-chatter about filters, shapes, and design. We have not yet mentioned the most important thing – the brewing.

The glass from which Chemex is made does not absorb any odors or flavors. And yet, it doesn’t mean that there’s no risk of disturbing the purity of the coffee. First of all, you should always remember to pour hot water over the filter before brewing. We simply place the filter in a carafe, double-walled towards the spout and pre-wet the entire filter with a gentle stream of water. Then, not only will the paper fold down perfectly and stick to the glass walls, but the paper flavor will also be washed out and won’t affect the coffee, as well as the entire dish will get warm. Of course, after this operation, you pour the water out.

Despite the fact that the brewing is relatively long, taking around four minutes, the coffee doesn’t taste heavy and over extracted. A thick paper filter makes the finished brew very smooth and clean in flavor.

Finally, there is also the matter of cleaning. This is actually the only drawback of this device. It is virtually impossible to stick your hand inside to clean the coffee residue from the bottom with a sponge. Generally, it is enough to rinse the vessel with clean water after each use, but when brown stains appear on the bottom, the whole becomes less transparent, you can use special tablets to dissolve the sediment. You can also use kitchen tongs to grab a slightly wet paper towel with some dishwashing liquid and reach to the bottom.

Originally, CHEMEX® Coffeemaker was just one single product. This is where it all started. With time, when the company turned from just a family business into a large consortium, the portfolio began to expand. And so, apart from the whole series of original Chemexes in various sizes and two versions – with a wooden collar or with a glass handle – we can find other interesting solutions. All of them, of course, consistent in the design.

For example, I was enchanted by the Chemex-shaped glass mugs. They look great! You can also find a sugar container or a very fancy glass… kettle. You can also customize your CHEMEX® by choosing the color of the tie, that is the rawhide around the wooden collar.

So, will you welcome the history of design into your kitchen? 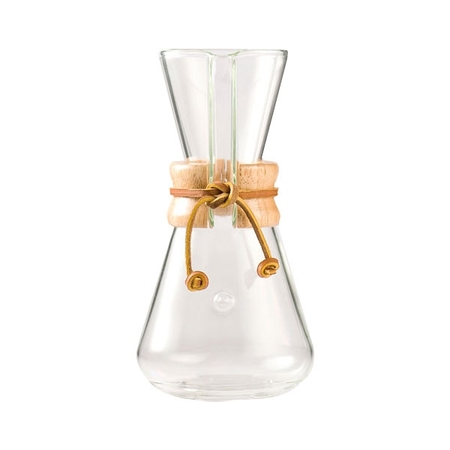 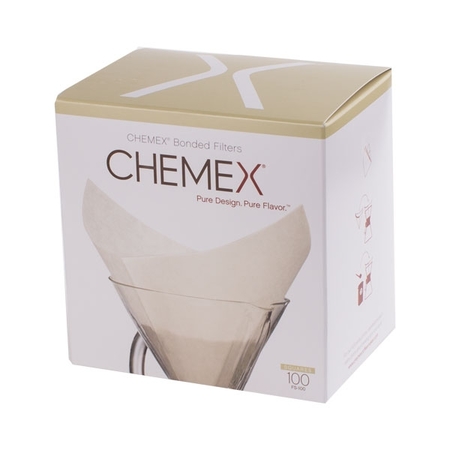 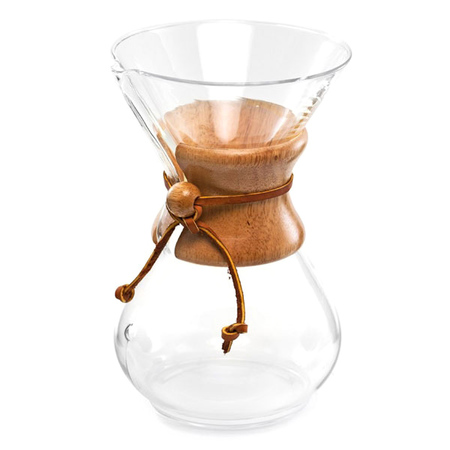